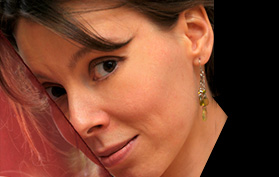 Belgian soprano Sabine Conzen was trained in the performing arts at the Opera Studio in Ghent and as a graduate of the Royal Conservatory of Brussels in voice and transverse flute. She was awarded, at the age of 22, the "Prize for the Youngest Finalist" and " Francis Poulenc Prize” at the Paris International Singing Competition.

The international press underlined her young talent at the time, speaking of her as “the revelation of the competition” and a “sensitive and already expert musician”.

In 2002, she debuted in France and Belgium with Don Giovanni and she took part in various productions and concert tours abroad (Benelux, France, Madagascar, Malaysia, Thailand, Singapore...).

2005 marked his Vlaamseopera debut in Nabucco, followed by die Zauberflöte, Don Giovanni and a remarkable production by Don Carlos.

In 2017, she will have the pleasure of making her debut at the Opéra de Metz in La Bohème and Auberge du Cheval Blanc. She will also sang Poulenc's The Human Voice.

In addition to her commitments as a soloist, Sabine cultivates a real passion for melody  and lieder genre and regularly performs in recitals.

In 2009, she recorded "Chemise de Nuit", a collection of music of Francis Poulenc inspirated by poems of Louise de Vilmorin (Quartziade Label).

Sabine Conzen also shares her knowledge with enthusiasm and kindness. She currently teaches singing at the Royal Conservatory of Music of Liège (higher school of arts) and at the Music Academy of Rixensart.