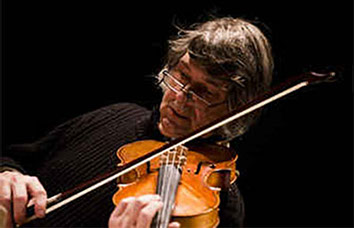 After his viola studies with E. Schiffer at the Royal Conservatory of Brussels (Koninklijk Conservatorium Brussel), Paul De Clerck studied with A. Gertler, B. Giuranna (Italy) and E. Vardi (New York), became a member of the “I Fiamminghi” chamber orchestra under R. Werthen and of the Arriaga string quartet. Later on, he also joined the Brussels String Quartet.

In 1982, Paul De Clerck became the solo violist of the National Belgian Opera Orchestra (Orchestre Symphonique de l'Opera National LaMonnaie/DeMunt) and a member of both the string trio and string quartet of LaMonnaie.

After ten years of collaboration, he left the orchestra, in order to devote himself more to  the performance of chamber music and contemporary music (with, amongst many others, Ensemble Modern Frankfurt).

Since a few years, Paul De Clerck has also devoted himself to the authentic performance practice; he is a member of the Quantum Ensemble and he performed the solo viola part of W.A. Mozarts Sinfonia Concertante with Anima Eterna under Jos Van Immerseel. He is regularly invited by several renomated classical ensembles and plays in Philippe Herreweghe's newly founded Bach Academie, as well as in may other projects conducted by Ph. Herreweghe.

Paul De Clerck teaches at the Royal Conservatory of Brussels (Koninklijk Conservatorium Brussel) and at the IMEP at Namur, Belgium. He is giving masterclasses in Belgium and abroad. As an actor-musician, Paul De Clerck collaborated with the theater companies Needcompany, Dito Dito and Stan.