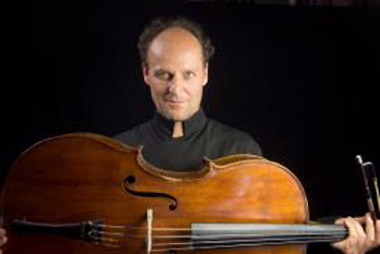 Martijn Vink (Netherlands) studied the cello in Utrecht, Warsaw, Prague and Paris and participated in master classes with E. Arizcuren, K. Michalik, P. Muller, H. Schiff, W. Pleeth, I. Monighetti, D. Fershtman, J. Chuchro, and others. He studied chamber music at the European Mozart Academy in Prague under the artistic guidance of Sandor Vegh. In addition to his musical training he studied psychology at Utrecht University, where he graduated in 1993.

He has focused on chamber music in all its forms since 1993. He is an open-minded musician in demand and his repertoire stretches from early medieval to contemporary music.

In addition to ongoing commitments to the ensembles Oxalys and Het Collectief, with whom he was awarded the Klara prize ‘Musician of the Year 2011′,  he recently founded the Taurus Quartet, an exciting and dynamic string quartet consisting of experienced chamber musicians. He has played with various groups in the major concert halls all over the world and has made regular guest appearances at many chamber music festivals.

Martijn has given performances of the cello concertos of Saint Saens, Lalo, Martinu, Shostakovich, Tchaikovsky, Haydn, Martinu , Dvorak and CPE Bach with various orchestras in Europe under conductors such as Hans Vonk, Ivo Venkov and Wiktor Lieberman.

His love and admiration for the six Suites of Bach is boundless and playing them is his daily joy. But his solo repertoire includes equally highly virtuoso modern compositions by composers such as Berio, Xenakis, Dutilleux, Scarrino, Ligeti, Britten, Chong, Dallapicola, Garrido, Kodaly, Hindemith and Ginastera.

He has collaborated in a number of dance and music-theatre productions. Together with with Viviane de Muynck, he created the duet piece ‘The Sound of Time’ and participated in several improvisation performances. He has played with many inspiring musicians throughout his career.

Martijn Vink was Professor at the Utrecht Conservatory from 2006-2010 and is currently Professor at the Lemmensinstitute in Leuven. He is a passionate and dedicated teacher in demand and is regularly invited to give masterclasses at the Royal Academy of Music in London, Chetham’s School for Music in Manchester, The High School for Arts in Hong Kong , the Academie d’Eté in Libramont and Murcia in Spain, among others.

He has made fifteen CD recordings many of which have won critical acclaim and prizes in the international music press. Recently, the Gramophone magazine hailed ‘the ecstatic sound and expression’ of his interpretation from Messiaens ‘Louange à l’Eternité de Jésus’.