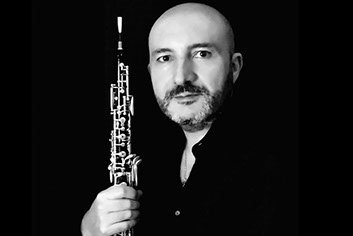 He has been the recipient of several prestigious awards and scholarships, such as Musical Youth of Spain and Santiago Lope Foundation.

He has performed as a soloist in Spain’s major concert halls, including the Palau de la Música of Valencia, Auditorium and Congress Centre and Romea Theatre in Murcia, Zaragoza Auditorium and the National Auditorium of Andorra.

His repertoire encompasses multiple genres and styles, having performed J S Bach’s double Concerto for violin and oboe BWV 1060 in C minor, W. A. Mozart’s Concerto kv314 in C major and Sinfonia Concertante in Eb major, B. Martinu’s Concerto for oboe and orchestra and Martin’s Concerto for 7 wind instruments.

He has been First Oboe in the Orquesta Sinfónica of Murcia, Young National Orchestra of Spain (JONDE), Orquesta Ciudad de Granada (English horn), Orquesta Ciudad de Elche, Moscow Virtuosi, Córdoba Orchestra, Bonn Beethovenhall. He has also been a member of the Valencia Municipal Orchestra, RTVE, OBC, OSPA and OST Orchestras. He is a founding member of several ensembles, such as the Ictus Quintet, Contemporary Ensemble Concertus Novo, Tetragram, Ensemble Arete, Harmony XXI and the MúVyN Ensemble.

He has recorded for several labels as part of multiple partnerships, including the ensemble Concertus Novo with works by Manuel Seco de Arpe, with his brother Andrés Valero for the Dutch label "World Wind Music" and the "NBM" label.

Several of his own works have been broadcast by Classic Radio. He is also a member of the SGAE, COSICOVA and the Valencian Music Academy. Since 2020 he has been developing new multimedia content based on performances of original arrangements and compositions.

In 1989 he was appointed Professor of Oboe at the Conservatory of Music of Murcia, where he has been teaching since 1988. He also gives masterclasses in Spain and Belgium.